From Wiktenauer
(Redirected from Manuals)
Jump to: navigation, search

Modern historical European martial arts reconstruction is founded on the study of so-called fencing manuals. While most regions of the world have produced a few martial arts treatises over the centuries, the European treatise tradition far exceeded any other in both its complexity and its sheer volume: well over a hundred and fifty distinct manuscripts and hundreds more printed works survive from the Medieval and Early Modern time periods. In some sense, the practice of writing fencing treatises continues to this day in the form of books on the use of firearms and other small sidearms, as well as texts on Olympic fencing and other forms of sport combat.

These texts are generally not manuals as the modern audience understands the genre; rather than offering step-by-step instructions on fighting, they are more often general treatises on a variety of martial subjects, and even those treatises that include details and illustrations of specific techniques generally fail to present a set of instructions that a reader can easily follow. Reconstructing the historical European martial arts thus involves consulting a variety of different types of literature in order to arrive at a well-rounded understanding of their content, including fencing treatises, wrestling treatises, and books of military strategy. 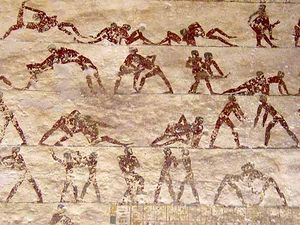 Detail of the wrestling scenes at Beni Hasan.

The earliest recordings of martial arts teachings consisted only of images. One example is a fresco in tomb 15 at Beni Hasan, Egypt, showing illustrations of wrestling techniques dating to ca. 2,000 BC. Similar depictions of wrestling techniques are found on Attic vases dating to Classical Greece. The only known text that could be classified a martial arts treatises from Western antiquity is P.Oxy. III 466 (2nd century), detailing Greek wrestling techniques. In addition to these depictions of martial techniques, treatises on other martial subjects also survive, the most famous of which is Flavius Vegetius Renatus' book on Roman military tactics De Re Militari.

For ease of reference, Wiktenauer divides the corpus of Western martial arts literature into six basic genres. A few texts defy categorization under this system, such as Paulus Hector Mair's Geschlechterbuch, but these distinctions are generally quite useful.

A commonplace book (or Hausbuch) is essentially a scrapbook, usually made by a wealthy individual. In the late Middle Ages, they were created as repositories of miscellaneous items and information that the owner considered significant, including medical recipes, quotations, letters, poems, tables of weights and measures, proverbs, prayers, and legal formulas. Each commonplace book was a unique work reflecting its creator's hobbies and interests. Some of these books, such as the Pol Hausbuch (MS 3227a), therefore included copies of martial arts treatises that passed through their owner's hands.

Fencing book (or Fechtbuch) is a catch-all term for treatises on armed combat. Medieval fencing treatises tended to be compilation works, manuscripts that included a variety of distinct treatises by different authors. Treatises by a single author, such as Fiore delli Liberi's treatise Fiore di Battaglia, or on a single weapon, such as Le Jeu de la Hache, were less common in this period. Many manuscripts of the 1500s draw on the same small pool of common treatises, which they combine in various ways. This tradition reached its pinnacle in the mammoth 1,200-page compilations that Paulus Hector Mair commissioned in the 1540s. In the Renaissance period, and especially as printing became more common, this emphasis changed and fencing masters began preparing and personally publishing more extensive treatises on a variety of different weapons. Some, such as Salvator Fabris, devoted massive volumes to the use of a single weapon.

A number of sketchbooks created by talented artists survive from the Medieval and Renaissance time periods. These artists, including such masters as Albrecht Dürer and Maarten van Heemskerck, generally sketched fencers and wrestlers as studies in human anatomy. Because of this, they offer unique insight into the physical positions and movements of the art, providing a useful counterpoint to the large number of text-only fencing treatises. Some of these works were created as draftbooks for later complete fencing treatises.

A tourmanent book (or Turnierbuch) is generally a record of a specific tournament that occurred. Aside from being interesting glimpses into the sportive side of historical European martial arts in period, tournament books are also useful for their depictions of authentic arms and armor.

War book (or Kriegsbücher) are useful texts for understanding the methods and theory behind warfare in the Middle Ages and Renaissance. Many compilation fencing treatises from the 15th and 16th centuries also include excerpts from war books such as Konrad Kyeser's famous work Bellifortis or Flavius Vegetius Renatus' De Re Militari. Siege warfare was an especially popular subject in this genre.

The wrestling book (or Ringbuch) can be seen as a subset of the fencing treatise genre. Most 15th century martial arts manuscripts include at least one wrestling treatise, but wrestling was often seen as an aspect of armed combat and not a separate discipline. It isn't until later in the Renaissance that books devoted exclusively to wrestling and other unarmed techniques appeared in increasing numbers.

Note that these dates are approximate in many cases. More specific information about the dates of treatises can be found on their respective pages.

For known manuscripts that do not yet have separate pages, see manuscript purgatory.
For an expanded table with additional information, see Manuscripts.

Books and other printed matter