From Wiktenauer
Jump to navigation Jump to search
This page has been proofread, but needs to be validated.

though we often chop and change, turne and returne, from ward to ward, from fight to fight, in this vnconſtant ſearch, yet wee neuer reſt in anie, and that becauſe we neuer find the truth: Engliſh maiſters of defence, are profitable members in the common wealth, if they teach with ancient Engliſh weapons of true Defence, weight and conuenient length, within the compaſſe of the ſtatures and ſtrength of men to command, becauſe it maketh them ſafe, bold, valiant, hardie, ſtrong and healthfull, and victorious in the warres, ſeruice of their Prince, defence of their friendes and countrey. But the Rapier in reaſon not to be taught, nor ſuffred to be taught, becauſe it maketh men fearefull and vnſafe in ſingle combat, and weak, & vnſeruiceable in the warres. and therefore we neuer find it, becauſe we neuer ſeeke it in that weapon where it may be found. For , to ſeeke for a true defence in an vntrue weapon, is to angle on the earth for fiſh, and to hunt in the ſea for Hares: truth is ancient though it ſeeme an vpſtart : our forefathers were wiſe, though our age account them fooliſh , valiant though we repute them cowardes : they found out the true defence for their bodies in ſhort weapons by their wiſdome, they defended them ſelues and ſubdued their enemies , with thoſe weapons with their valour. And (Right honorable) if we will haue this true Defence, we muſt ſeeke it where it is, in ſhort Swords, ſhort Staues the halfe Pike , Partiſans , Gleues , or ſuch like weapons of perfect lēgths , not in long Swords, long Rapiers , nor frog pricking Poiniards : for if there be no certain grounds for Defence, why do they teach it ? if there be , why haue they not found it? Not becauſe it is not : to ſay ſo, were to gaineſay the truth : but becauſe it is not cer- 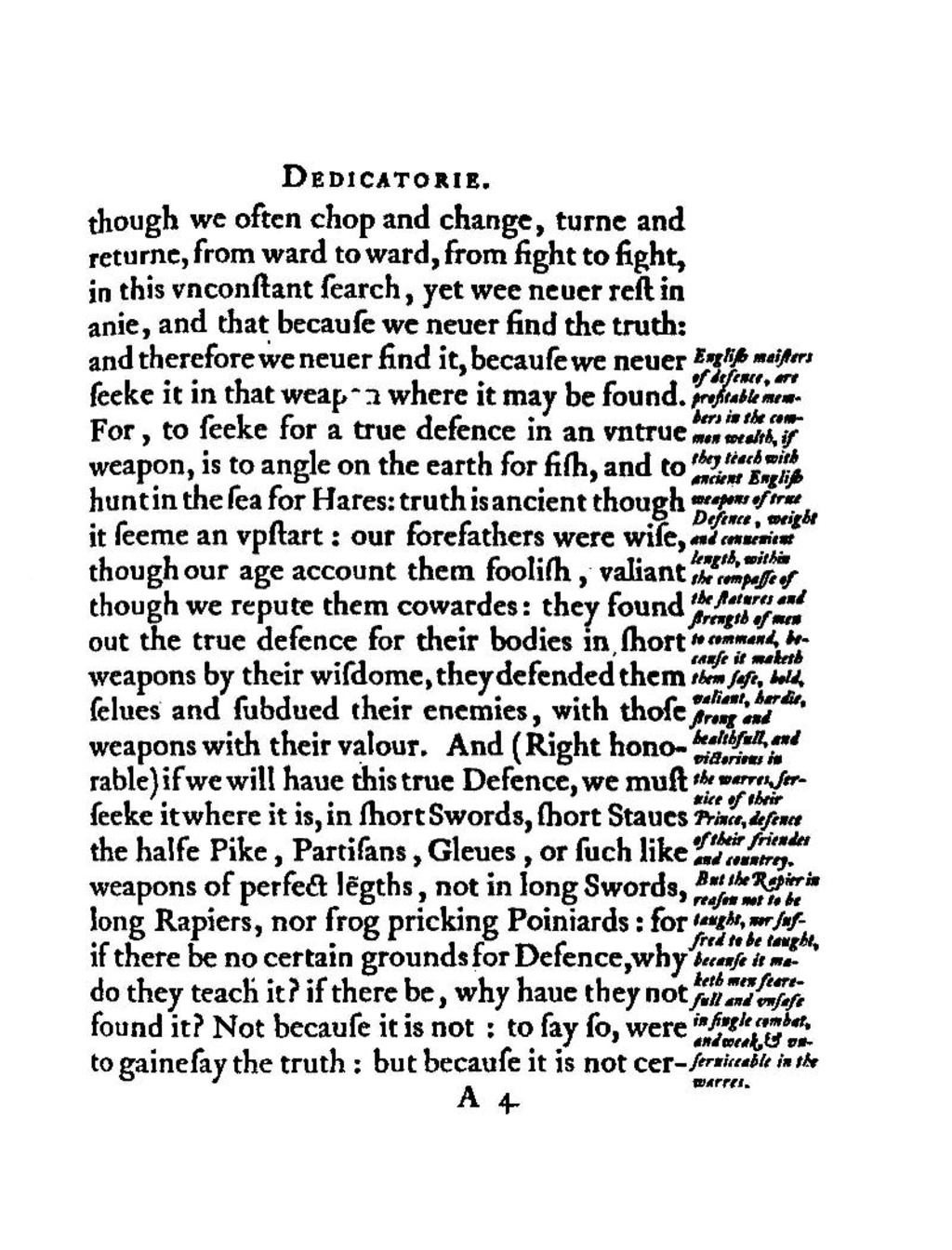