Difference between revisions of "Gloss" 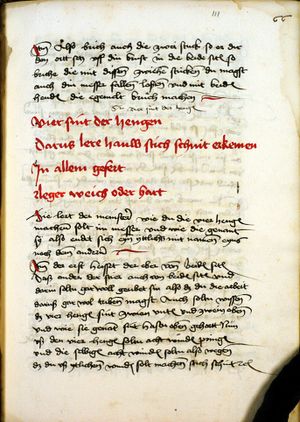 A gloss is a brief notation of the meaning of a word in a text. It may be in the language of the text, or in the reader's language if that is different. A gloss was originally a note made in the margin or between the lines of a text in a classical language, in which the meaning of a word or passage is explained. As such, glosses can vary in thoroughness and complexity, from simple marginal notations of words one reader found difficult or obscure, to entire interlinear translations of the text with cross references to similar passages.

A collection of glosses is a glossary. A collection of medieval legal glosses, made by so-called "glossators", is called an apparatus. The compilation of glosses into glossaries was the beginning of lexicography, and the glossaries so compiled were in fact the first dictionaries. In modern times a glossary, as opposed to a dictionary, is typically found in a text as an appendix of specialized terms that the typical reader may find unfamiliar.

'Gloss' takes on a specialized meaning in the manuals. Rather than discussing the meaning of obscure or unclear words, the glosses in the fighting manuals tend to exposit the meaning of older teachings, such as the recital of Johannes Liechtenauer. These glosses tend to form the main body of each work, with the verse itself a comparatively brief text leading each section.