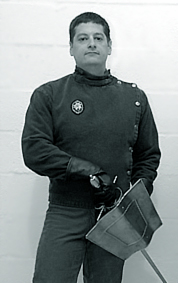 Steve grew up in rural north-central Pennsylvania. His long and varied college career included time as a music performance major for the Classical Guitar before graduating with a Bachelor of Science in Computer Science.

Steve’s interest in swordsmanship started in college in the mid eighties with collegiate fencing and kendo, and his martial training continuing in the nineties in Shaolin Kuntao. Steve began his western martial arts training in 2002 as a member of MASHS and he is a former charter member and instructor of the Order of the Seven Hearts.

Steve is one of North America’s premier researchers and instructors of the Bolognese school of swordsmanship of the 16th century as described in the works of Antonio Manciolino, Achille Marozzo, Giovanni Dall’Agocchie, and The Anonymous Bolognese Manuscripts from Ravenna as well as the works of contemporary Italian swordsmenship of the 16th century. In addition, Steve has modest experience in the systems of early 17th century Italian Rapier, the Baroque Rapier of the late 17th century, and Italian Classical Swordsmanship of the 19th century.

In 2010, Steve was elected to and is currently serving on the governing council of the HEMA Alliance.

In addition to Steve’s western martial arts pursuits, he is a student of Shindo Muso Ryu Jodo and Nakamura Ryu Battodo at the Capital Area Budokai.

Steve lives in Arlington, VA where he works as an IT subcontractor for the US Army. He can be contacted by email here.

Steven Reich has transcribed some portion of the following texts.