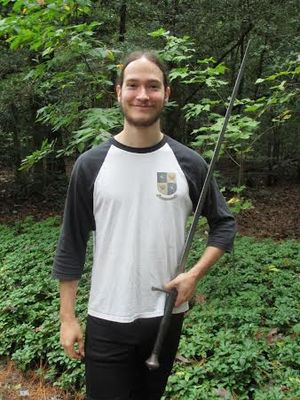 Cory Winslow is a HEMA Alliance Certified Instructor and the Vice Director of the HEMAA Curriculum Council. He has been seriously researching and training in Historical European Martial Arts since 2003 with a focus on the works of the German Masters. In 2006 he founded the first Medieval European Martial Arts Guild (M.E.M.A.G.) training school in Salisbury Maryland with his assistant instructor Joshua Reptsik. Cory taught at the Halbinsel Fechtschule of MEMAG in Salisbury Maryland from its founding until 2014, when he moved to Luray Virginia to found the Blue Ridge Sword School branch of M.E.M.A.G. with his wife Betsy. In addition to teaching regular classes, he has also held his own classes or assisted teaching at several local, regional and national HEMA events such as: Bonfire of the Fencer, Chivalric Weekend, The HEMA Alliance Mid-Atlantic HEMA Gathering, Longpoint, Octoberfecht and Fechtschule New York. He has also participated in numerous demonstrations and lessons at the Chesapeake Celtic Festival, The Salisbury Dogwood Festival, The Salisbury School, Salisbury University, Wor-Wic Community College and the Maryland Irish Festival. Along with teaching, Cory has volunteered as staff at several different events and has also competed in the open longsword tournaments at Longpoint and Octoberfecht. He took first place in steel longsword at MEMAG's first inter-school tournament in 2013. Cory is the creater and organizer of the Paired Technique Competition, which has been held at Shortpoint, Fechtschule New York, and Longpoint. He is in charge of the creation and revision of the Longsword and Dagger Syllabi, and also the overall curriculum used in all MEMAG schools. He has translated numerous works in piecemeal fashion, but has completed and donated Hans Talhoffer's Fechtbuch of 1467, the gloss on the Long Sword from the Rome version of "Pseudo-Peter von Danzig", the messer portion of the Augsburg Group, and several sections of Paulus Kal's Fechtbuch to the Wiktenauer project.