templation thereof: hoping that at the length, I shoulde finde out the true principles and groundes of this Arte, and reduce the confused and infinite number of blowes into a compendious summe and certaine order: The which principles being but fewe, and therefore easie to be knowen and borne away, without doubt in small time, and little trauaile, will open a most large entrance to the vnderstanding of all that which is contained in this Arte. Neither was I in this frustrate at all of my expectation: For in conclusion after much deliberation, I haue found out this Arte, from the which onely dependeth the knowledge of all that which a man may performe with a weapon in his hand, and not onely with those weapons which are found out in these our dayes, but also with those that shall be inuented in time to come: Considering this Arte is grounded vpon Offence and Defence, both the which are practised in the straight and circuler lynes, for that a man may not otherwise either strike or defend.

And because I purpose to teach how to handle the Weapon, as orderly and plainly as is possible: I haue first of all layd down the principles or groundes of all the Arte, calling them Aduertisements, the which, being of their owne nature verie well knowen to all those that are in their perfect wittes: I haue done no other then barely declared them, vvithout rendring any further reason, as being a thing superfluous.

These principles being declared, I haue next handled those things, vvhich are, and be, of themselues, Simple, then (ascending vp to those that are Compound) I shewe that vvhich may be generally done in the handling of all Weapons. And because, in teaching of Artes and Sciences, Things are more to be esteemed of than VVordes, therefore I vvould not choose in the handling hereof a copious and sounding kinde of speach, but rather that vvhich is more briefe and familiar. Which maner of speach as in a small bundle, it containeth diuers weightie things, so it craueth a slowe and discreete Reader, who will soft and faire pearce into the verie Marrowe thereof.

For this cause I beseech the gentle Reader to shewe himselfe such a one in the reading of this my present worke, assuring him selfe by so reading it, to reape great profite and honour thereby. And 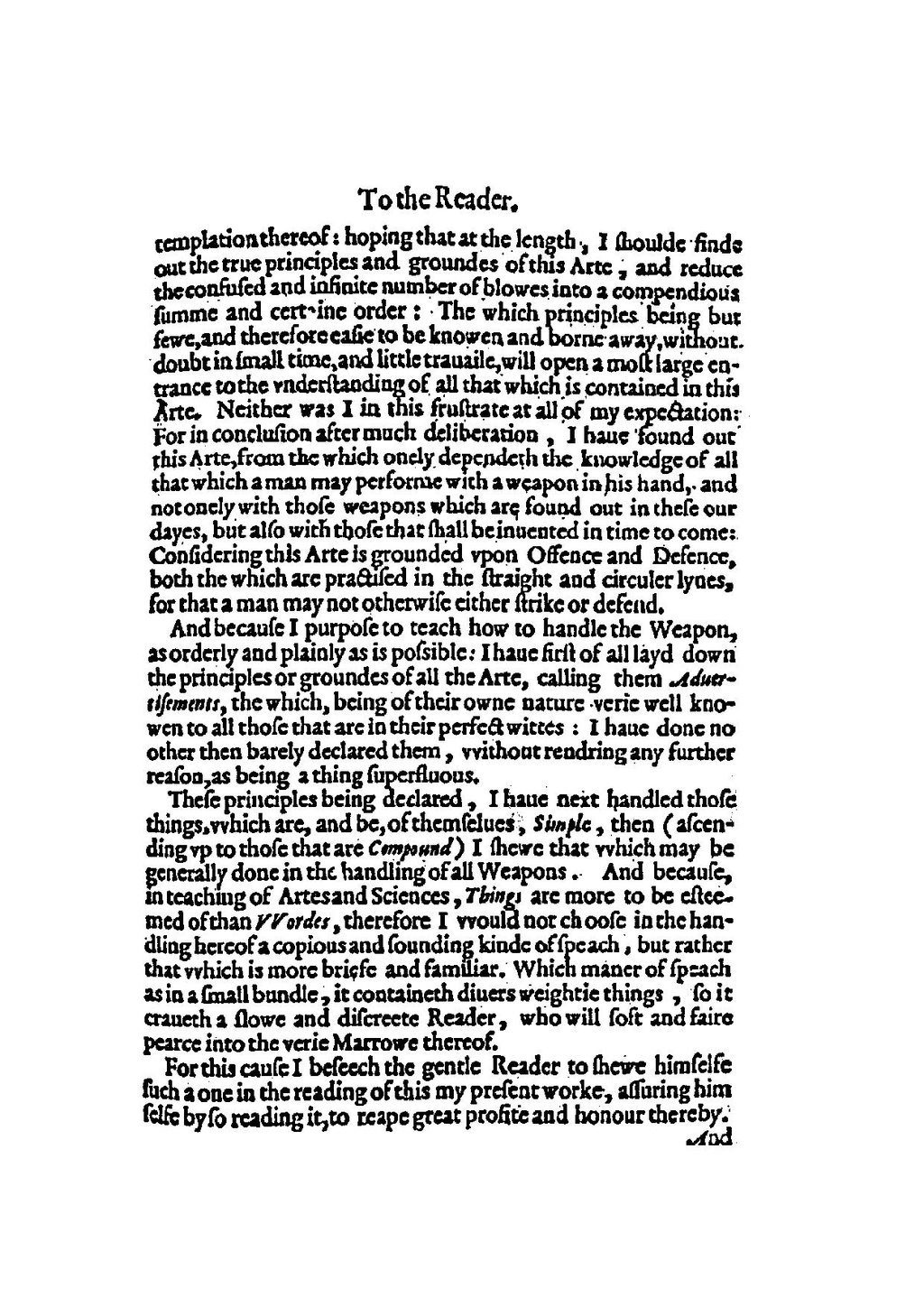