not caused, through debilitie of nature, but rather hangs about him, because he hath not accustomed to exercise his members thereunto.

There are two things to be considered in this exercise, to wit the hand that moueth, and the thing that is moued, which two things being orderlie laid downe, I hope I shall obtaine as much as I desire. As touching the hand and arme, according as I haue alreadie saide, it was deuided in the treatise of the true Arte, in three partes, that is to saie, into the wrist, the elbowe, and the shoulder, In euerie of the which it is requisite, that it moue most swiftlie and stronglie, regarding alwaies in his motion the qualitie of the weapon that is borne in the hande, the which may be infinite, and therefore I will leaue them and speake onelie of the single sword, because it beareth a certaine proportion and agreement vnto all the rest.

The sword as each man knowes, striketh either with the poynt or with the edge. To strike edgewise, it is required that a man accustome himselfe to strike edgewise as well right as reuersed with some cudgell or other thing apt for the purpose, First practising to fetch the compasse of the shoulder, which is the strongest, and yet the slowest edgeblowe that may be giuen: Next and presentlie after, the cōpasse of the elbowe, then that of the wrist, which is more preste and readie then any of the rest. After certaine daies that he hath exercised these three kindes of compassing edgeblows on after an other as swiftly as he may possible And when he feleth in him selfe that he hath as it were vnlosed all those three knittings or ioyntes of the arme, and can strike and deliuer stronglie from two of those ioyntes, to witte the Elbowe & the Wrist, he shal then let the Shoulder ioynt stand, and accustome to strike stronglie and swiftlie with those two of the Elbow and the Wrist, yet at the lengh and in the ende of all shal onlie in a maner practise that of the VVrist, when he perceiueth his hand-wrist to be well strengthened, deliuering this blowe of the Wrist, twice or thrice, sometimes right, sometims reuersed, once 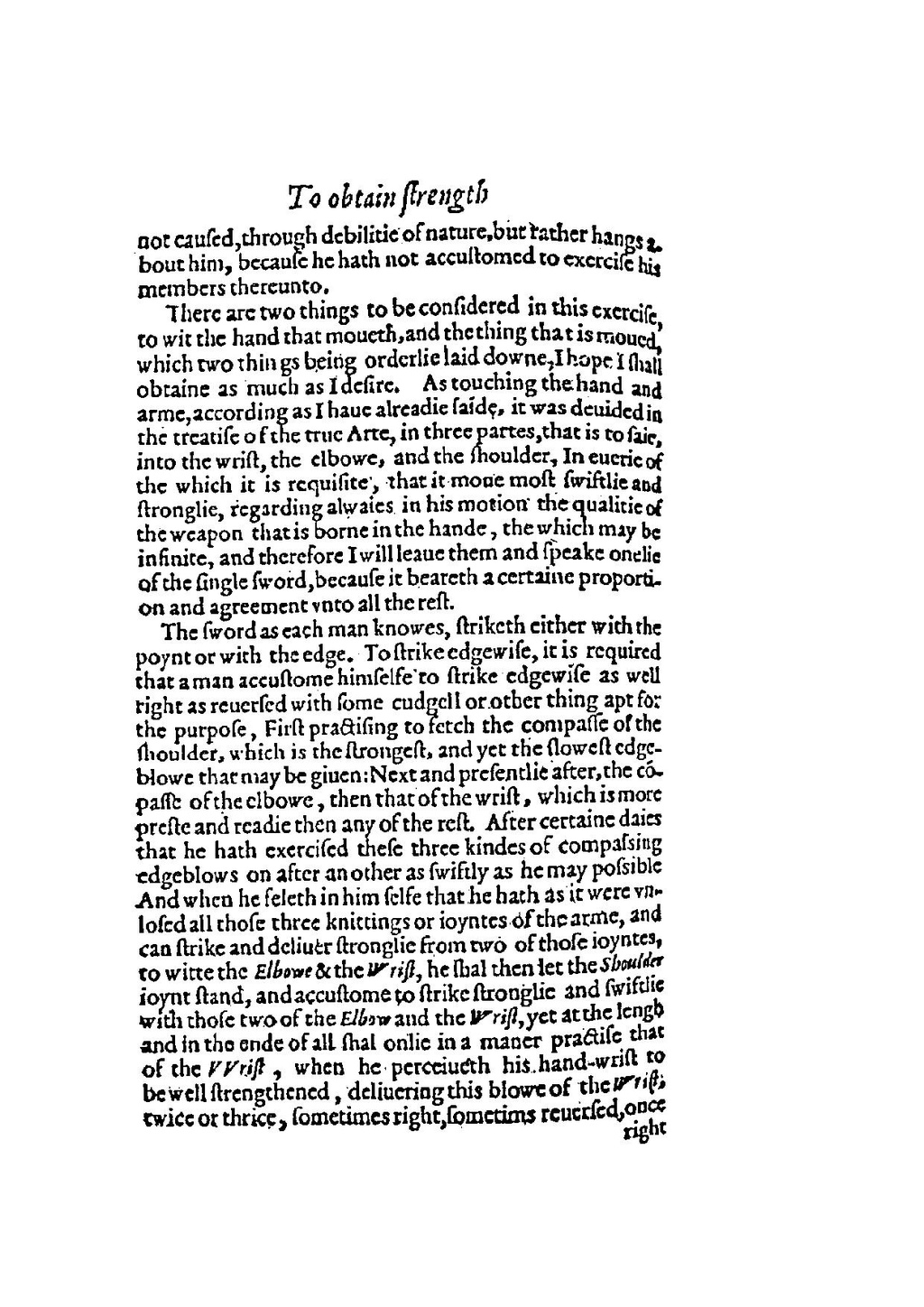