of the three wardes, to the ende, that from the warde he may deliuer strongly a thrust in as little time as is possible. And therefore he shall take heede that in the low warde, he make a reasonable pace, bearing his hande without his knee, forsing on the thrust nimblie, and retiring his arme backward, and somewhat encreasing his forefoote more forwardes, to the end the thrust may reach the farther: But if he chance to increase the forefoot a litle too much, so that the breadth thereof be painfull vnto him, then for the auoiding of inconueniences, he shall draw his hinderfoot so much after, as he did before increase with the forefoote, And this thrust must be oftentimes ierked or sprong forth, to the end to lengthen the arme, accustoming to driue it on vvithout retyring of it selfe, that by that meanes it may the more readily settle in the broad vvarde, For that is framed (as it is well knowen) with the arme & foote widened outwards, but not lengthened towards the enimie. And in thrusting let him see, that he deliuer them as str ight as he can possibly, to the end, they may reach out the longer.

At what time one would deliuer a thruste, it is requisite that he moue the body & feete behind; so much in a compasse, that both the shoulders, arme & feet be vnder one self same straight lyne. Thus exercisinge him selfe he shal nimbly deliuer a verie great & strong thrust. And this manner of thrusting ought oftentimes to be practised, accustoming the bodie & feete (as before) to moue in a compasse: for this mocion is that which instructeth one, how he shall voide his bodie. The thrust of the high warde is hardest of all other not of it selfe, but because it seemes that the high ward (especially with the right foote before) is verie painfull. And because there are few who haue the skil to place themselues as they ought to deliuer the thrust in as little time as is possible. The first care therefore in this ward is, so to place himselfe, that he stande steddily. And the syte thereof is in this manner, to wite: To stande vvith the arme aloft, and as right ouer the bodie as is possible, to the end he may force on the thrust vvithout dravv- 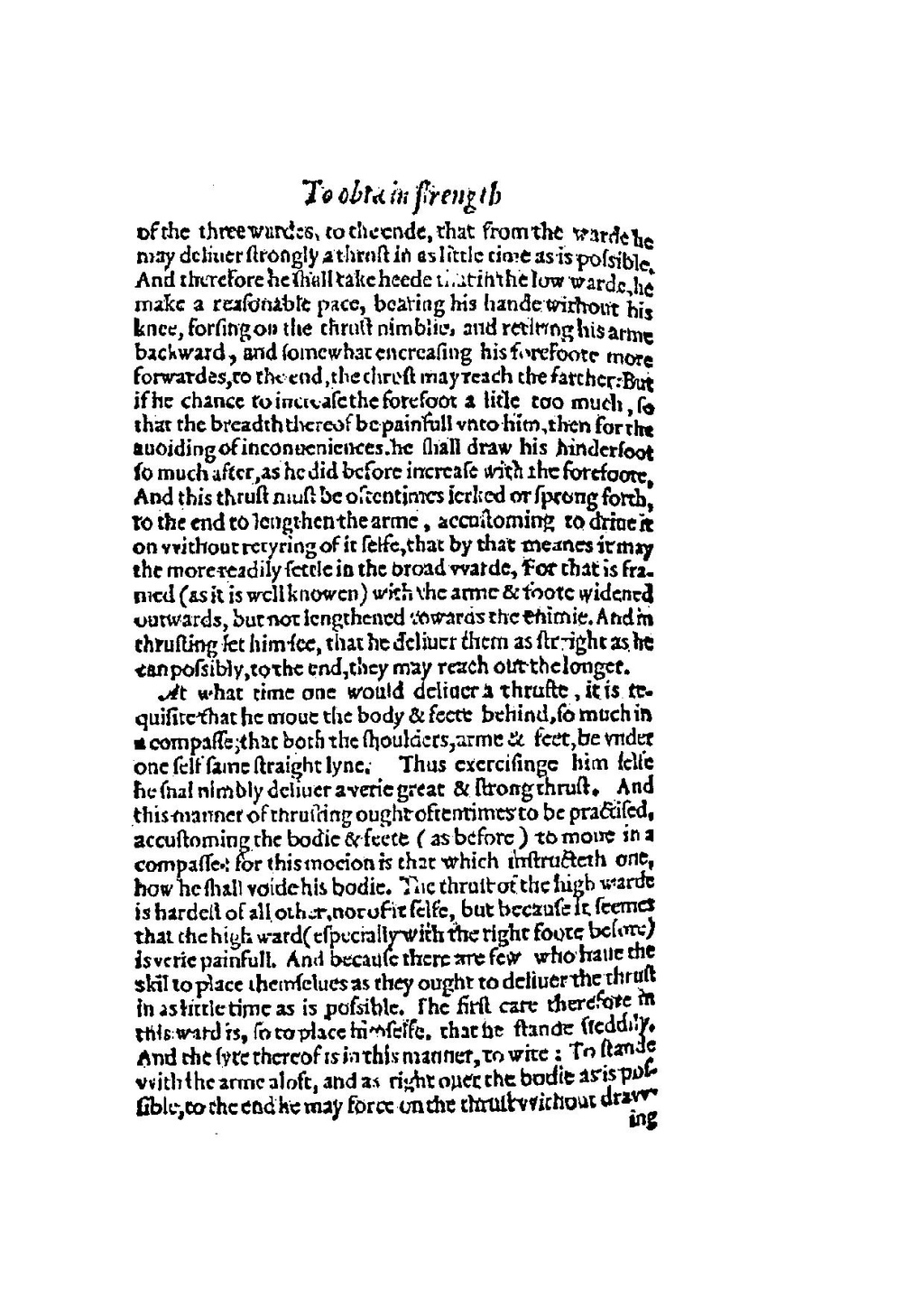