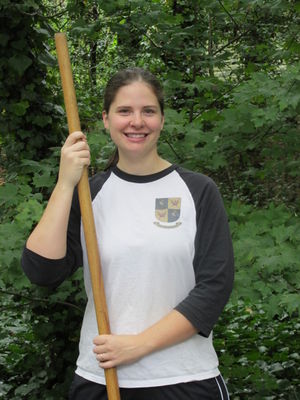 After diligent study and tireless practice she was made an instructor in 2009 at the Peninsula branch. In 2012 she and Cory were married and continued to teach regular classes at the Peninsula Fight School of MEMAG until early 2014, when they established the Blue Ridge Sword School in Luray, VA. In addition to teaching regular classes at MEMAG schools, Betsy has held her own seminars and taught or assisted teaching at several local, regional and national HEMA events, such as: Bonfire of the fencer, Chivalric Weekend, The HEMA Alliance Mid-Atlantic HEMA Gathering, Shortpoint, Longpoint, Octoberfecht and Fechtschule New York.

Betsy has participated in numerous demonstrations and lessons at the Chesapeake Celtic Festival, The Salisbury Dogwood Festival, The Salisbury School and the Maryland Irish Festival. Along with teaching, she has volunteered as staff at several events, and also competed in several open longsword tournaments, as well as in the Paired Technique Competitions at Shortpoint, Fechtschule New York and Longpoint, where she won first place in each with her partner Joshua Hawley. Betsy's latest research endeavors have been transcribing, translating and interpreting, Johann Georg Pascha's Jaegerstock, which she has now taught at several HEMA events.

Betsy is in charge of the creation and revision of the Staff syllabus used in all MEMAG schools.