From Wiktenauer
Jump to: navigation, search 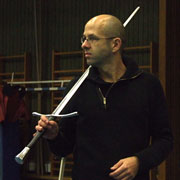 Dierk Hagedorn was born in 1966 in Hamburg, Germany, and he started sport fencing at the age of nine. He would have loved to do swordfighting instead but in those days there was just no opportunity. In 2003 he joined the group Hammaborg Historischer Schwertkampf, founded in 1999 in Hamburg, Germany, which concentrates on both reconstruction and training of the historical European martial arts. Dierk is currently Hammaborg's head instructor for the longsword.

Aside from this, Dierk Hagedorn is also a member of HEMAC, the Historical European Martial Arts Coalition, and has transcribed more than a dozen German manuscripts and made them publicly available. He has published an extensive volume about one of the most important German manuscripts, the so-called Codex Danzig (Rome Codex 44.A.8).

In real life, Dierk is an illustrator, web-designer and lecturer.

Dierk Hagedorn's transcription work is featured in the following articles: