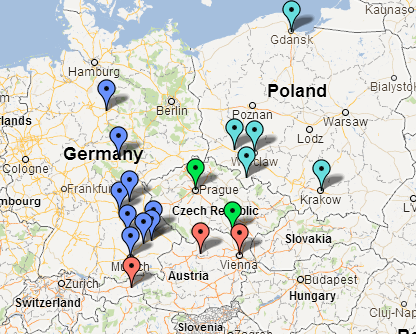 This map gives the probable birthplaces and residences of the members of the fellowship. The colors indicate modern-day nations, but in their period all of these lands were part of the Holy Roman Empire.

The Fellowship of Liechtenauer (Geselschaft Liechtenauers) is a group of seventeen masters listed in the introduction to the three oldest copies of Paulus Kal's fencing manual. It is unclear whether this was ever a formal organization or what its nature might have been. However, in the early 1400s fighting men often organized into companies called Gesellschaften when they went to war; this was especially common during the Hussite Crusades of the 1420s and 30s, which is the time-frame when the first records of masters on this list begin appearing. The Fellowship of Liechtenauer may therefore be a group his students and associates which he assembled for a military campaign. Alternatively, it has been speculated that the list is rather a memorial to deceased masters of the grand master's tradition.[1] Of particular interest is the international nature of the group, including masters from present-day Austria, Czech Republic, Germany, and Poland, which parallels the statement in the MS 3227a that Liechtenauer himself traveled to many lands to learn the art. Several masters from this list are known to have written fencing treatises, but about half remain completely unknown.

Paulus Kal, the presumptive author of the list, includes the following as members of the fellowship:

Master Stettner, he goes on to note, taught a great many students including Kal himself.